SELECT YOUR RADIO STATION FORMAT BELOW 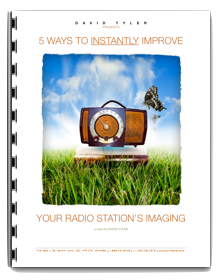 David Tyler has been a radio imaging voice since the mid 1990s. His very first station was CKBL-FM in Saskatoon, Canada which had recently signed on as a Hot Country station calling themselves HOT 93. From there his voice spread across Canada to Kamloops in British Columbia (B-100) to The Wave (CJLS) in Nova Scotia and South of the border into the United States.

David’s voice has been used to image stations in markets all around the US including San Francisco, Las Vegas and Daytona Beach. Because of his vocal range and adaptability he is able to voice any format: News/Talk, Country, Rock, AC, HOT AC, CHR, Classic Hits…whatever you can throw at him, he’s ready.

David is ready to work with you and your station to bring it life on a new level. He’s available for cash or barter via The MIX Group.

AVAILABLE FOR CASH OR BARTER via The MIX Group